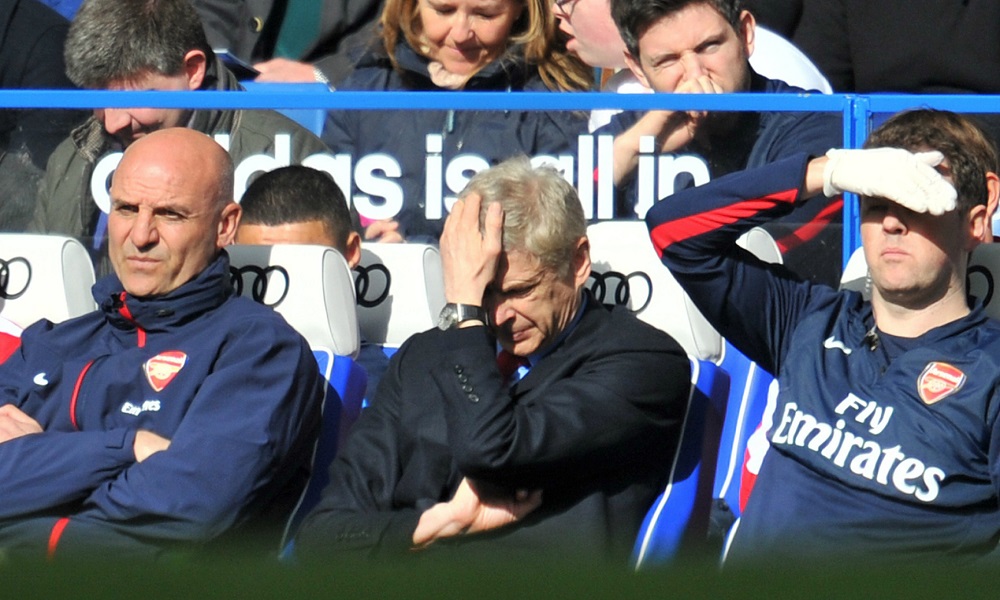 It’s not easy being an Arsenal fan. On the one hand, you need to resign yourself to routinely taking drubbings that make you the laughing stock of the football world.

On the other hand, complain about how bad you’ve got it, and fans from other clubs will quite rightly point out your sense of entitlement (and possibly your overuse of the word ‘blud’).

The really bad news? No matter how befuddled Arsene Wenger appears to have become, there’s a sense things can grow more frustrating still. But hey, it’s not like embarrassing defeats are a new phenomenon for the Gunners. Here, then, are some of the most hellacious Arsenal beatdowns in the history of the Prem. 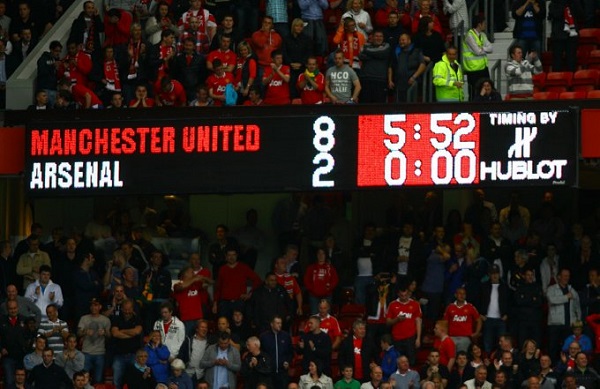 Notorious in recent footballing history, this was a game between two sides who had been arch-rivals seven or eight years earlier. Yet since the Invincibles of the 2003-04 season, and Chelsea’s emergence as a footballing superpower thanks to the arrival of Roman Abramovich’s riches and Jose Mourino’s nous, the Gunners’ standing in the Premier League had sadly receded.

Arsenal came into this game with a side depleted through injury, and still looking for their first win of the season. Instead they found themselves on the wrong end of one of the ugliest scorelines in their history, as United fans enjoyed a Wayne Rooney hat-trick, a brace for Ashley Young and goals for Nani, substitute Park Ji-Sung and Danny Welbeck, who scored the opener. It was Arsenal’s worst loss since 1896 (when they were beaten by Loughborough).

Theo Walcott and Robin Van Persie were Arsenal’s scorers, while Carl Jenkinson was sent off for the Gunners on the 77th minute. By then the visitors had already conceded six goals. For United, David de Gea had saved a Van Persie penalty shortly after Welbeck’s opener, snuffing out the hope of an instant comeback from the Gunners. Arsenal fans desperate to take some kind of positive from this game might take some comfort in the fact that the side still finished third in the Premier League at the end of the season. 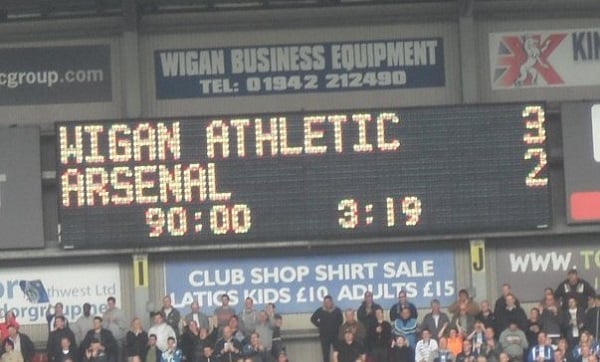 There were other painful losses for Arsenal in this season – a 3-0 defeat at home to Chelsea in the league, followed days later by a 3-0 loss away to City in the League Cup. But it’s somehow more quintessentially Arsenal to lose to unfashionable North-west side Wigan – in a game where, with 10 minutes left to play, Arsenal were seemingly home and hosed.

Walcott had scored in the 41st minute, with Mikael Silvestre adding a second soon after the second half began. Yet with Arsenal apparently easing to a 2-0 victory, relegation-threatened Wigan would explode into action in the final minutes of this game, Ben Watson scrambling home a goal on the 80th to make this a finish to remember. Titus Bramble headed in an equaliser on the 89th minute – before Charles N’Zogbia scored a fine, curling shot from the edge of the area in stoppage time to take all three points. 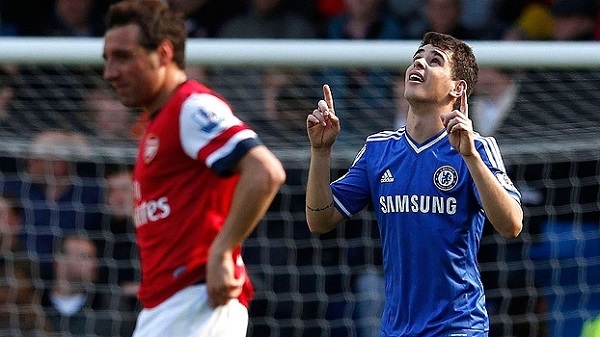 Already having been dicked 6-3 by Man City at the Etihad in December, and then 5-1 by Liverpool at Anfield in February, worse was still to come at Stamford Bridge in March, for Wenger’s 1,000th game in charge of Arsenal. With Jose Mourinho enjoying his second stint at the Bridge, the home win looked a banker – no Mourinho side has ever never lost to Wenger in the league. Still, few expected the Gunners to go down so gracelessly. This win would become Mourinho’s biggest yet in the Premier League.

With Arsenal two-nil down in the opening 10 minutes thanks to Samuel Eto’o and Andre Schurrle, Kieran Gibbs was sent off for Arsenal in the 15th minute, with Eden Hazard slotting home a penalty two minutes later to give Chelsea an unassailable lead. That they’d doubled it by the end of the game spoke of Arsenal’s total inability to keep the rampant Blues at bay.

Oscar would score twice, with substitute Mohamed Salah wrapping things up in the 71st minute in a display that was akin to the local bully tormenting the school swat. Mourinho took the role of Gripper Stebson, while the unfortunate Wenger (and his side) more closely resembled Walter the Softy. 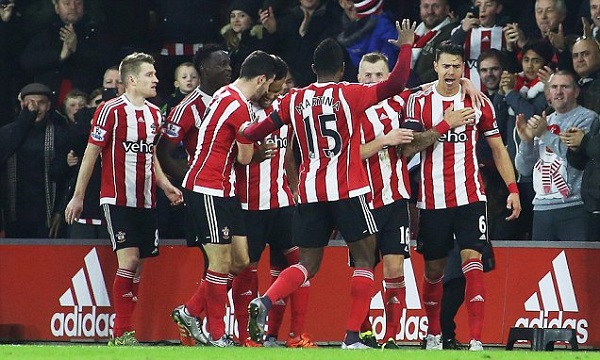 For the first half of the 2015/16 season, Arsenal had been doing reasonably well – indeed, a victory in this match, and they could have topped the table. Yet this Boxing Day visit to St Mary’s proved an unwanted Christmas present, the hapless Gunners going down to a spirited Southampton side who had been flirting with the relegation places.

Shane Long scored twice for the Saints, while full-back Cuco Martina marked his first start in the Prem by curling home the opener from 30 yards out. Jose Fonte also found the back of the net against an Arsenal side that dominated possession, but came away with nothing to show for it. 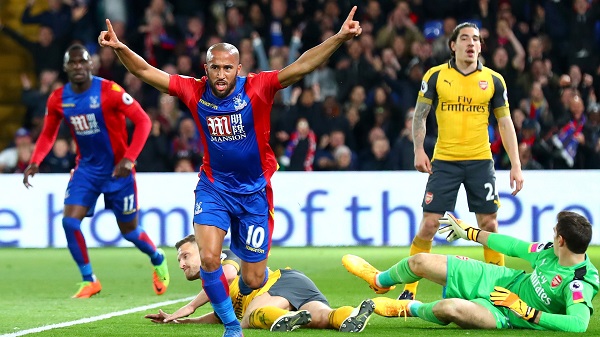 In a season where Palace only won a handful of times at home in the Prem (to the likes of Hull, Watford, Middlesbrough, Southampton and Stoke), it’s notable that one of their biggest wins of the campaign came against a Wenger side. Albeit a Wenger side at their most ineffectual.

Andros Townsend opened the scoring for the home side, with Yohan Cabaye and Luke Milivojevic scoring a penalty to wrap the game up. It was a toothless performance from the visitors, who enjoyed 72% possession, but couldn’t muster a shot on target in the second half.

Anyone looking to captain Theo Walcott to deliver a post-match rallying cry for the Gunners was out of luck. The sometime England player’s accurate but uninspiring verdict? “Palace wanted it more. You could sense that from the kick-off.” Thanks Theo!