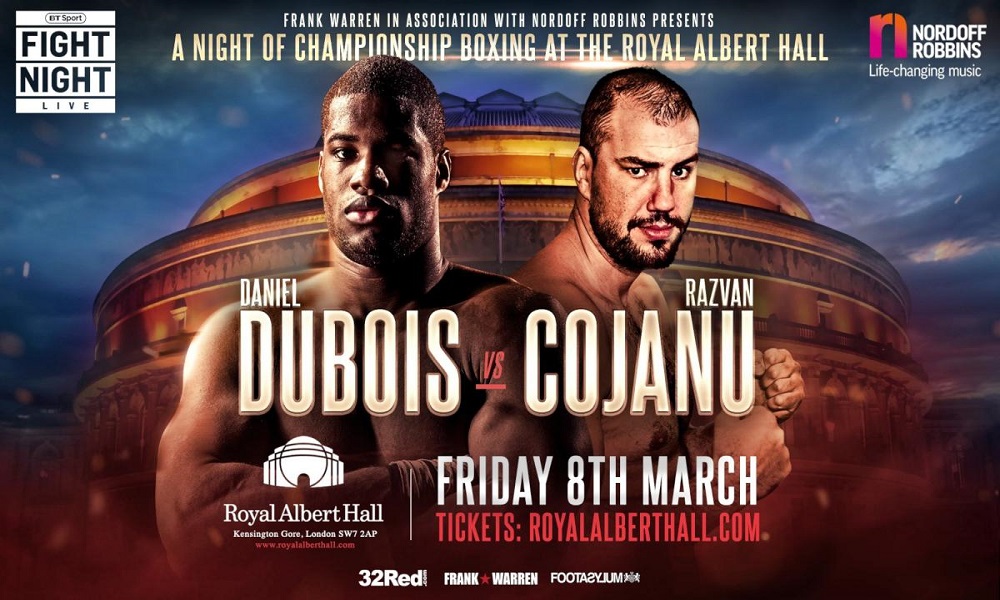 In his latest exclusive diary, 32Red ambassador Daniel Dubois looks ahead to his fight against Razvan Cojanu at the Royal Albert Hall on Friday. For all the latest fight odds, visit our sportsbook.

What do I expect from Cojanu? Well, he’s a man with a pair of gloves on and he’s going to come and bring his ‘A’ Game I think. That’s what I’ve got to prepare for and believe me I have. I’m going to be ready for whatever he brings.

He’s definitely a good opponent and this is a good chance to mark where I’m at, skill-wise and to see where I am at the moment as a professional. I’m really looking forward to it.

People are obviously going to watch how I look against him and compare it to how Nathan Gorman did. It’s not really a new thing for me. I’ve had comparisons for my whole career. Right back to the amateurs people have been comparing me to other fighters so it’s nothing new really. Boxing is a sport and this is what you’d expect from any sport. I’m not overawed by it at all. I welcome it if anything.

It doesn’t really add any extra motivation or fire to me. I just know how to keep myself motivated and how to stay busy in the gym. I want to be the best I can be day after day in the gym, every week and every month. I put as much in as I can in the gym and I know it’s an old saying but it’s true; You only get out what you put in.

Rivalries are great for boxers. You need good quality opposition and opponents who will help you to build good domestic fights and good international fights. You need rivals and, right now, it’s great that there are a few names around who are at the same sort of stage that I’m at.

I love the heavyweights of the 1990’s and just look at Lennox Lewis, Mike Tyson, and Evander Holyfield. They were all great for each other and really pushed each other on further and further. Those guys were all exceptional fighters and exceptional men and they proved that they were the best of their era. That’s what I’m going to prove in my era and that’s what I’m working towards every day.

At The Royal Albert Hall I’m disappointed I won’t be sharing the bill with Nicola Adams. My sister, Caroline, has been doing brilliantly. She won gold at the Youth Olympics last year. I don’t think Caroline should try and be like anybody else. She’s her own unique character and being herself is what’s worked for her so well up to this point.

The first Olympic gold medal really brought Nicola Adams to prominence. Caroline would probably like to emulate what she’s done in winning Olympic gold and going on to prove herself as one of the the best female boxers – in fact, forget female – one of the best boxers on the planet full stop. If you’re a good fighter, you’re a good fighter. That’s what my sister is going to prove. She’s a brilliant fighter.