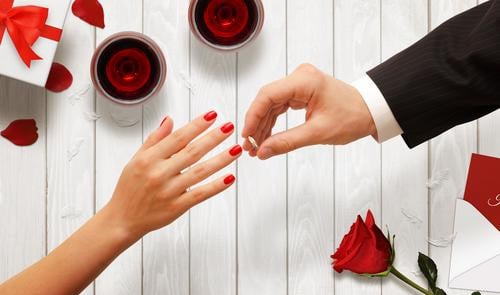 Getting a marriage proposal right is kind of a big deal. In fact, it can leave even the burliest of blokes trembling with anxiety. Do you act the big dog and go for an epic gesture that’ll blow her mind? Or do you play the cool underdog and get her swooning with your subtlety? Here are some top ideas that’ll help you pop the question in style this Valentine’s Day.

Do you secretly enjoy the odd chick flick? Got a soft spot for the soppy stuff in life? If so, you’re probably best off going for a tear-jerker when you propose. You could pop the question in the place where her parents or grandparents got engaged, or take her to a sentimental spot that means something to just you two. Why not follow in the footsteps of ultra-romantic Matthew McConaughey who took Christmas to a whole new level with his epic gesture. The actor wrapped his partner’s engagement ring in eight different boxes, and had her gradually open them in front of the whole family.

If you’re stumped for proposal ideas, you can’t go wrong with a jet-plane classic. Whether you go for a giant message scrawled out in pebbles across your favourite beach, or get a plane to stream a huge sign through the sky for everyone to see, there’s no doubt your other half will go weak at the knees at this kind of grand gesture. The tried and tested method was good enough for rapper Ludacris, who made the papers when he proposed to his now-wife Eudoxie Agnane. The hip hop star had, ‘Will you marry me?’ spray-painted on the ground they were soon to fly over in his private jet. The ludicrous idea clearly wowed his lady!

It’s many a-girl’s dream to be treated like a princess, so why not jump on the Disney bandwagon and propose by the Enchanted Castle itself? You wouldn’t be the first to have a successful and, need we say, totally magical extravaganza of an engagement there. High School Musical star and Disney Channel household name, Corbin Blue, somewhat appropriately proposed to his lucky lady at Walt Disney World in Orlando. And as if that wasn’t fairy-tale fantasy enough, he even presented the ring to her in a glass slipper. Nice one mate.

There are wedding proposals, and then there are wedding proposals. And if you’re the kind of guy that never does anything by halves, why not go for a show-stopping approach. We’re thinking something along the lines of Kanye West’s proposal to Kim Kardashian. He put on a production of epic proportions in a baseball stadium, in which he enlisted a 90-piece orchestra, pyrotechnics and a jumbotron to make a moment to remember. Not to mention the fact that it was broadcast to millions of viewers on E! as part of Keep Up With The Kardashians.

The ‘That Could Have Gone Better’

As a word of warning, don’t forget that not all marriage proposals go smoothly! News sites like The Telegraph reported the fail of all fails last summer, when a guy proposed to his girlfriend by hiding an engagement ring in amongst greasy mayo and lettuce leaves in her Crispy Chicken Deluxe from Maccy D’s. She literally face-palmed in response. And the best bit is, her reaction was caught accidentally on camera and leaked all over the web. Better luck next time, buddy.

Taking a chance on an all singing and dancing marriage proposal can pay off, big time. So to get yourself in the mood, why not check out our Immortal Romance online slot, this Valentine’s Day.