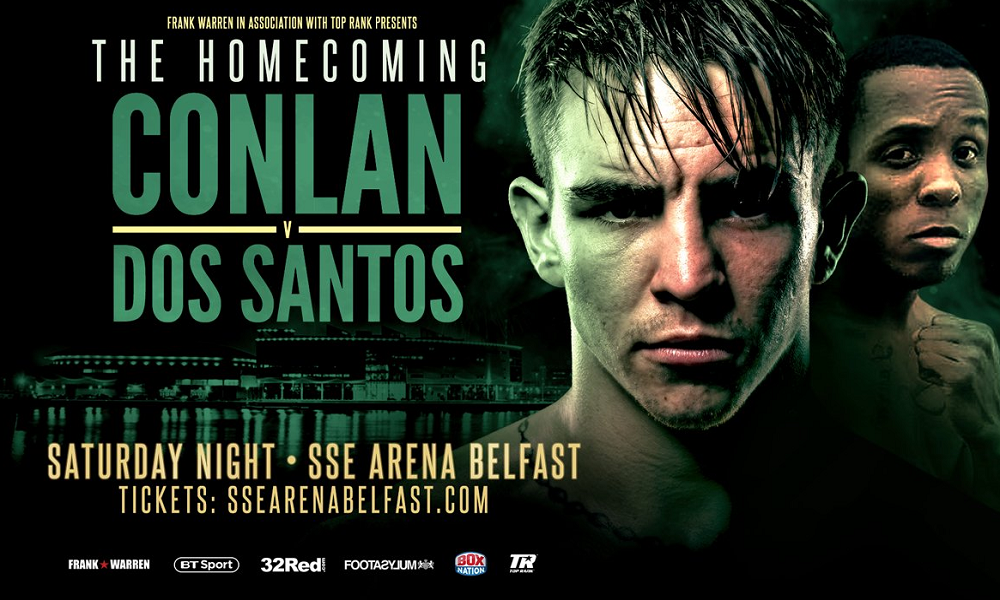 Michael ‘Mick’ Conlan didn’t get his open top bus parade through Belfast. There was no victory tour of the television chat shows. His family don’t have a photo hanging proudly in their living room of him playfully biting an Olympic medal. Instead, a google image search of Conlan (7-0, 5 KOs) throws up that now infamous image of him giving the middle finger to the judges who destroyed his Olympic dream.

Two years on from the Games in Rio and fifteen months since his professional debut, and newly sponsored by 32Red, 26-year-old Conlan finally makes a triumphant return to his home city when he faces former world title challenger Adeilson Dos Santos at the Odyssey Arena this weekend. Find the latest odds here. The eighth fight of his professional career certainly has a different feel to it than the previous seven.

“There definitely is. I’m getting some amount of publicity back home and so much interest from people who want to get tickets,” the 32Red ambassador said. “I’ve always wanted to box in the arena. I’ve been there so many times watching the likes of Carl Frampton fight.

“I’d say Carl beating Kiko Martinez and winning the European title is probably the best fight I’ve seen there. Or maybe a Martin Rogan one. He was an entertainer. I’d have to sit down and have a think but I’ve enjoyed all of them and the atmosphere is always brilliant. When I stood there waiting for Carl to walk out for the Nonito Donaire fight in April, the hairs were standing up on the back of my neck. It was special and something that got me buzzing for this fight more than my last fight at Madison Square Garden. I was looking too far ahead which was a bit stupid. I still got the win.”

It’s hard to imagine a fighter wishing away a night at Madison Square Garden but with his Belfast homecoming already booked in, Conlan patiently boxed his way to a decision over one Ibon Larrinaga on the undercard of the Vasyl Lomachenko-Jorge Linares superfight in May. Desperate to avoid any injuries which could scupper his plans, Conlan used the ring as a classroom.

“I’ll maybe not make that mistake of announcing a fight before I get the one in front of me out of the way again. In the fight I don’t feel I was fully focused the way I should have been. One of the later rounds he threw a jab and it was one of the only shots that he landed. It grazed my eye and as soon as I got back to the corner I said to Adam: ‘Am I cut? Do you think this will affect Belfast?’ That was stupid. Why was I even thinking of that at that stage? It was definitely in my mind. I was trying not to get cut. I could have really went Mexican style on him and taken him out but I didn’t want to risk getting cut as he was dipping his head. There were a few times when I could have taken him out but I worked on things that I’d been practising in the gym and I actually think that when my career is all done, I’ll look back and think that it was a very good learning fight for me.”

For Conlan’s loyal fans, it may be a case of grabbing every opportunity they possibly can to see him in action. Their hero may be back home this weekend, but he isn’t planning on prolonging his stay to clear out the domestic featherweight scene. It is inevitable that Conlan is taking more notice of his domestic rivals now he is based in Redhill with Adam Booth but it is no more than a passing interest. The vast majority of his future will be played out across the Atlantic.

“Much of my career is still gonna be based in the US so I’ve gotta keep my eye on things over there but being in and around London I’m hearing about these kids more and now some are coming sparring. I’ve always kept my eye on local and homegrown talent as there’s always the potential for big moneymaking fights there isn’t there?

“I never had a traditional route in mind and – if I’m honest – I didn’t care what belts I win on the way up. The only belts I really care about are the main ones: the world titles. Whatever comes in between is part of the process and part of learning and growing as a professional fighter. I’ll take whatever comes but I’ve never been the type of guy to say: ‘I really want to win a British or Commonwealth title’ because if they’re my aspirations, it doesn’t look good on me I don’t think. My aim is always to win something bigger and to be the best. Not to be the champion of Britain. Even winning the Irish title isn’t in my mind.

Leaving his first professional trainer Manny Robles in California and relocating to Booth’s gym was a calculated move on Conlan’s part. Over the past six months he has decided to reign in the aggression which had begun to seep in to his style and get back to the boxing skills which earned him a whole host of amateur accolades but on Saturday night he will be straining at the leash to provide his hometown fans with a spectacular finish.

“If I see blood or see Dos Santos hurt, its time to put the foot on the gas and go Julio Caesar Chavez on him. What I’m very grateful for is how my career has gone so far and how it’s prepared me for something like this. The fact that I debuted in the Garden in an atmosphere that I don’t think many people will ever experience – even if they’re fighting for a world title – built me for this kind of occasion and to be comfortable in that chaos. The atmospheres that I’ve fought in will stand me in great stead.

Jack Catterall exclusive: I know I’ve got to win convincingly
The Homecoming: Exclusive video with Mick Conlan and Paddy Barnes