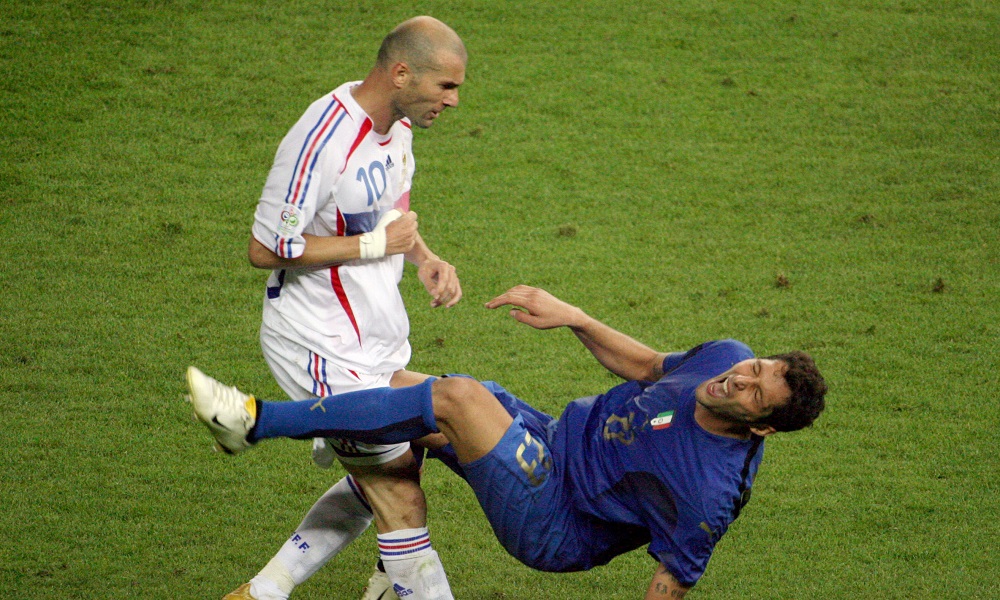 It’s a hell of a haul for the shameless Spaniard – but Ramos is hardly the only player who’s picked up some barmy bookings over the years.

To honour these titans of truculence, we’ve trawled through some of football’s more anarchic moments to revisit those players who were sent off in staggeringly silly fashion. It’s like, how much more red could these red cards be? And the answer is none. None more red. 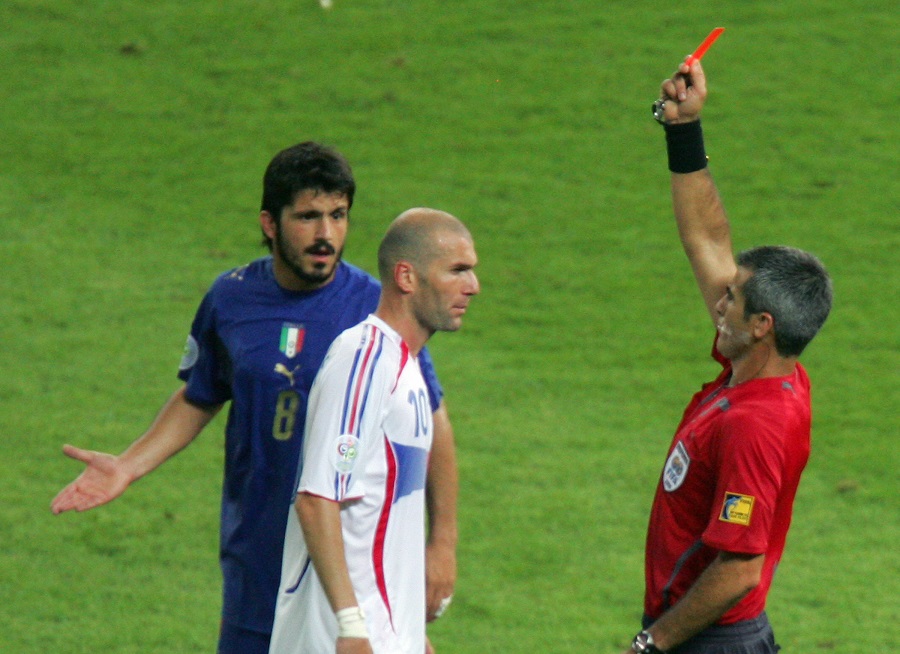 Renowned for being one of the finest midfielders in the world but also a little fiery, Zidane would live up to the second of those labels at pretty much the worst possible moment.

At the 2006 World Cup final in Berlin, Zizou opened the scoring for France with a penalty in the 7th minute, but Italian defender Marco Materazzi scored an unlikely equaliser for the Italians soon after.

The score remained 1-1 at the end of normal time – and in the second period of extra time, the two scorers tangled. On having his shirt pulled, Zidane reportedly told “Matrix” that if the Italian wind-up merchant wanted his shirt that badly, he could have it after the game.

Materazzi supposedly replied “I’d rather have your sister’s shirt” – a harmless enough riposte, you’d think, but Zidane failed to see the funny side, opting to commit what may be the world’s first ever bodily-aimed headbutt.

Perhaps sticking a Glasgow kiss on his target’s torso, rather than his mush, was Zidane’s attempt at restraint. If so, it didn’t work; the French captain was sent off (eventually – referee Horacio Elizondo had not initially seen the incident, with the fourth official alerting him), in what was Zidane’s final appearance for his national side.

The match would be decided by penalty shoot-out, with Italy emerging victorious – and Materazzi amongst those finding the net for the Azzurri. 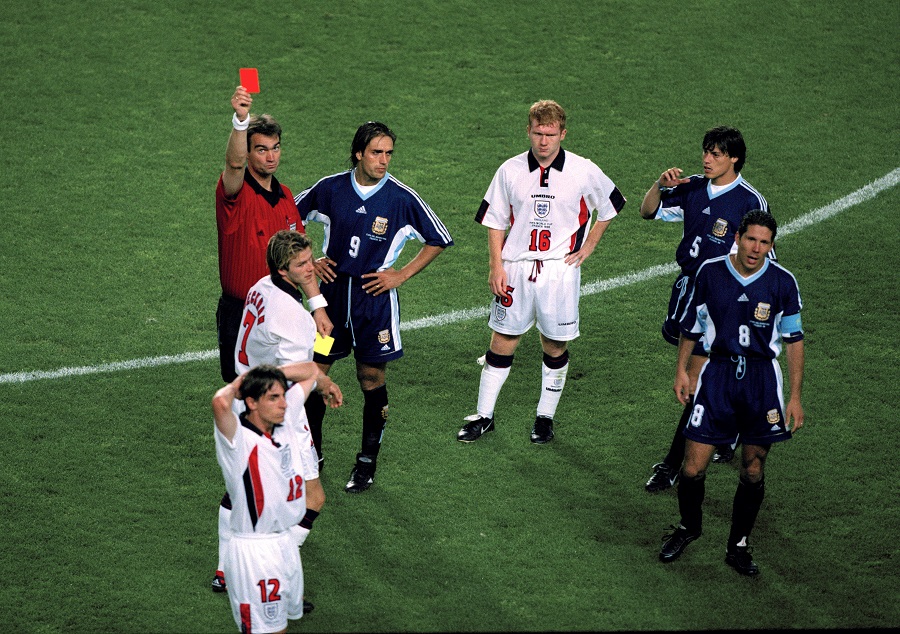 David seems a great lad, but I’m not the first to point out that he may not be the sharpest knife in the box. When Argentine arch-arsehole Diego Simeone jumped into the back of Becks during a crucial World Cup encounter, the Englishman, laying prostrate on the pitch, aimed a tit-for-tat kick at the defender. Preposterously but effectively, Simeone collapsed to the turf himself while simultaneously demanding action from the official.

With the incident taking place right under the nose of referee Kim Nielsen, the ref quickly flourished a red card, sending the stunned Becks off the pitch. England were forced to defend for more than an hour after Beckham’s dismissal, eventually losing the match in a penalty shootout; after the tournament, the England man would return to the UK to discover he was the latest whipping boy for certain tabloid newspapers. No wonder he moved to Miami.

Di Canio was a fine talent with some questionable political views, but is remembered chiefly these days in England for (a) being a terrible manager – see his spell with Sunderland in 2013, when the Italian was sacked after 13 games – and (b) pushing over hapless referee Paul Alcock.

The incident occurred in 1998 when Di Canio played for Sheffield Wednesday. During a Premier League encounter against Arsenal at Hillsborough, in the second half Gunners captain Patrick Vieira pushed Wim Jonk, an act that so enraged Di Canio that he raced over, pushing Vieira, kicking Martin Keown and grabbing the Arsenal defender’s face in a way that was crying out for a smack in the mouth, generally escalating the incident.

Alcock would show Di Canio the red card, and for a second it looked as though the player was considering debating the official. But quickly deciding such a course of action would be pointless, instead the player shoved the ref in annoyance – an act that saw Alcock go stumbling back, tumbling to the turf in undeniably comical fashion.

Not that the FA saw the funny side, banning Di Canio from playing for 11 games and handing the Italian a £10,000 fine. Mamma mia, that’s a spicy meatball! 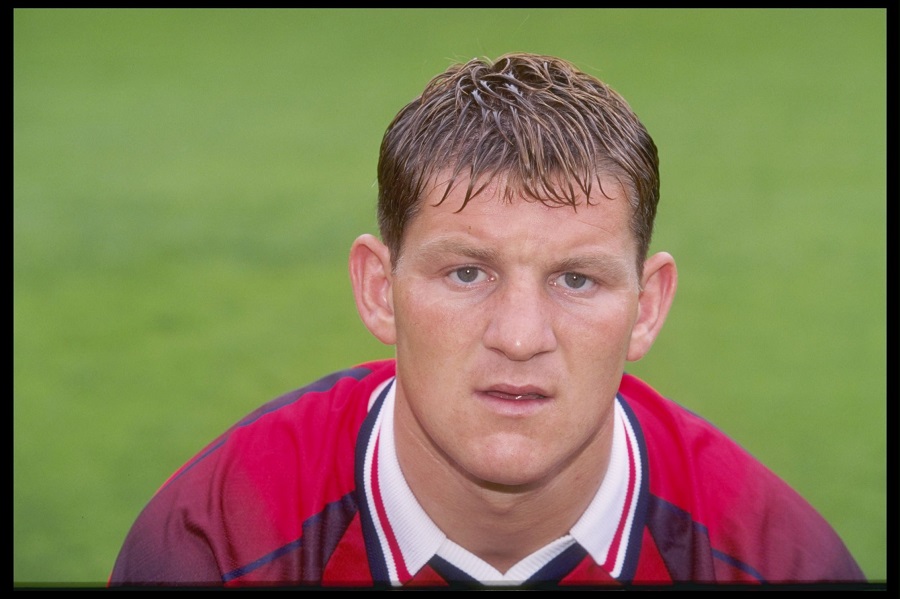 A cult hero at Hull, the strangest incident in Windass’s career came during his time at Aberdeen. In a league game for the Dons against Dundee United in 1997, Windass managed to secure three red cards in the same match.

Obviously, Windass was required to leave the field – but instead he chose to berate the official, earning the equivalent of a second red card in penalty points, according to Dougal’s match report.

And when Windass did finally walk off the pitch, he attacked a corner flag in frustration – receiving the equivalent of a third red card for his indignant antics. The Englishman was then fined two weeks wages and banned for six games, although at least his temper tantrum has lent him a unique sort of notoriety in football history – if nothing else, it’s an amusing anecdote for his after dinner speaking gigs…

Kevin Horlock, Man City – walk on the wild side 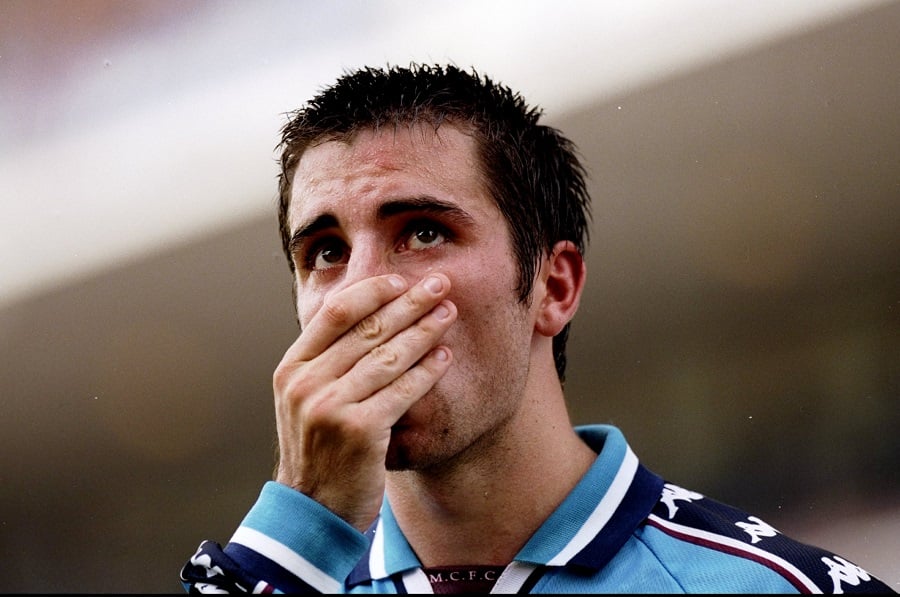 Not one of the better known names on our list, but definitely deserving of recognition is one Kevin Horlock, who found himself being expelled from a game for the unforgivable crime of walking in a threatening manner.

In a match against Bournemouth in 1999, when Man City played in the second division, Horlock approached referee Brian Coddington to ask him a question in the final minute of the game. And with the ref deeming Horlock’s movement “aggressive”, the player was shown his second yellow card of the match.

When the referee made his decision, Horlock was so taken aback that he looked behind him, assuming the official must have been brandishing a card at another player. It was only when Coddington insisted “No, you – off you go!” that the Man City man realised the truth.

Years later, Horlock can laugh about the incident. “I’ve got one leg shorter than the other, so maybe [the movement] looked like I was being a little bit aggressive. It’s something that everyone remembers and it’s funny now – but it wasn’t at the time!”

Wise words Kev. Let’s just hope that anyone who witnessed Horlock’s unforgivably intimidating gait at the time has been able to get over the experience…

Weekender: All the must-see football action over the next few days
FA Cup preview: All the midweek action including Derby v Man Utd