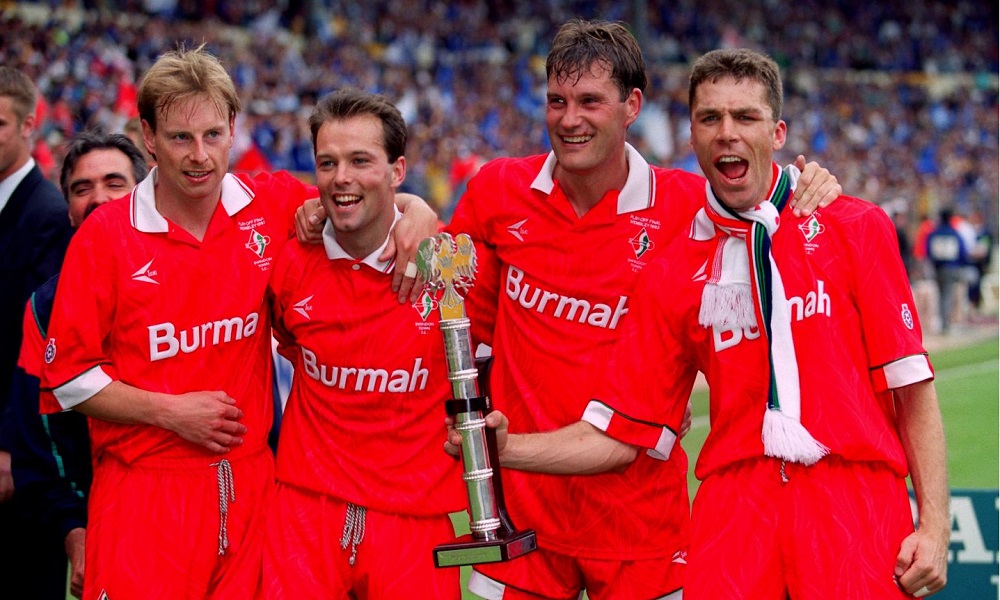 The greatest Premier League play-offs ever

Not long now until Aston Villa and Derby face off for the chance to play in the Premier League, in a game that’s set to delight one set of supporters – and leave the others in a rather less chipper frame of mind. For all the latest betting, visit our sportsbook.

But whatever the outcome, can this game match some of history’s most engrossing Premier League play-offs? Here’s our pick of the bunch…

Remember when player manager Glenn Hoddle took Swindon Town into the Premier League? Swindon had taken the lead through Hoddle’s 42nd minute strike, and early in the second half Craig del Maskell and Shaun Taylor put the Robins 3-0 up – but as it turns out, 3-0 can be the most dangerous scoreline.

That third goal lit a fire under the Foxes, with Julian Joachim striking back in the 57th minute to offer Leicester a slender lifeline. Steven Walsh scored a second in the 68th minute, with Steve Thompson following up a minute later to stun Swindon, making the score all square.

With the match poised for extra time, there was still time for a final twist – and it came in the 84th minute, as Paul Bodin scored what would be a decisive penalty for Swindon. That goal sealed promotion to the top flight for the first time in Swindon’s history, prompting delirious celebration from the fans – though success would be short-lived, with Hoddle leaving to join Chelsea before the start of the new season, and Swindon themselves being relegated from the Premier League at the end of their debut season, having conceded exactly 100 goals.

It’s tough times for Bolton right now, but things weren’t always so bleak at this club – and in 1995, the Lancashire side enjoyed one of its most meaningful ever victories under boss Bruce Rioch. Even if things didn’t exactly go according to plan to begin with.

Reading were 2-0 up after the first 12 minutes, Lee Nogan and Adrian Williams both finding the net to give the Royals a blistering start. It could have been worse too, Keith Branigan brilliantly saving a penalty for Bolton to prevent Reading going 3-0 up. But future manager Owen Coyle would drag Bolton back into contention with a headed goal in the 75th minute, before substitute Fabian de Freitas equalised to take the game into extra time, prompting one commentator to exclaim “what a ding-dong do!”.

Finnish midfielder Mixu Paatelainen would score in the 105th minute to give the resurgent Wanderers the lead – and then De Freitas would score again in the 118th minute to seal the victory. Reading sub (and co-manager) Jimmy Quinn came to life a minute later, smashing home from a fine backheel pass to make it 4-3 and ensure a frantic finish – but there was to be no fairy tale come back for Reading.

This match swung back and forth, Charlton’s lethal striker Clive Mendonca and Sunderland’s lanky Niall Quinn the key men for much of the game. Mendonca would open the scoring in the 23rd minute, with Quinn levelling early in the second half; Kevin Philips would give the Black Cats the outride lead in the 58th minute, only for Mendonca to equalise in the 71st minute.

Minutes later, Quinn scored his second to give Sunderland the advantage – but Richard Rufus kept the London club in this, hitting the back of the net in the 85th minute to make it 3-3 – and ensure extra time.

Two further goals would follow, Nicky Summerbee putting Sunderland ahead before Mendonca levelled the scores once more for his hat-trick – meaning penalties would have to decide the outcome.

Thirteen spot kicks were emphatically dispatched before the first – and decisive – slip-up came, Michael Grey’s rather tame effort saved by Sasa Ilic – Charlton winning 7-6 on penalties to clinch their place in the Prem. What a game!

At the last competitive fixture to be played at the original Wembley, it was Tykes vs Tractor Boys – with South Yorkshire’s finest eventually taking a bit of a ploughing.

Barnsley would take the lead through an own goal from the luckless goalkeeper Richard Wright – a strike from Craig Hignett rebounding off the crossbar onto Wright’s back, and then into the goal.

But George Burley’s Ipswich would eventually go 3-1 up, with goals from Tony Mowbray, Richard Naylor and William Stewart, before Hignett threatened to drag his team back into the contest, dispatching a penalty in the 78th minute; just as well, with Barnsley having already missed one pen just before half-time…

Alas, the revival never really happened, with Martijn Reuser scoring at the death to make certain of an Ipswich victory…

Greatest sporting comebacks of all time
Champions League Preview, Tottenham v Liverpool: Why it really is all or nothing for nearly-man Klopp