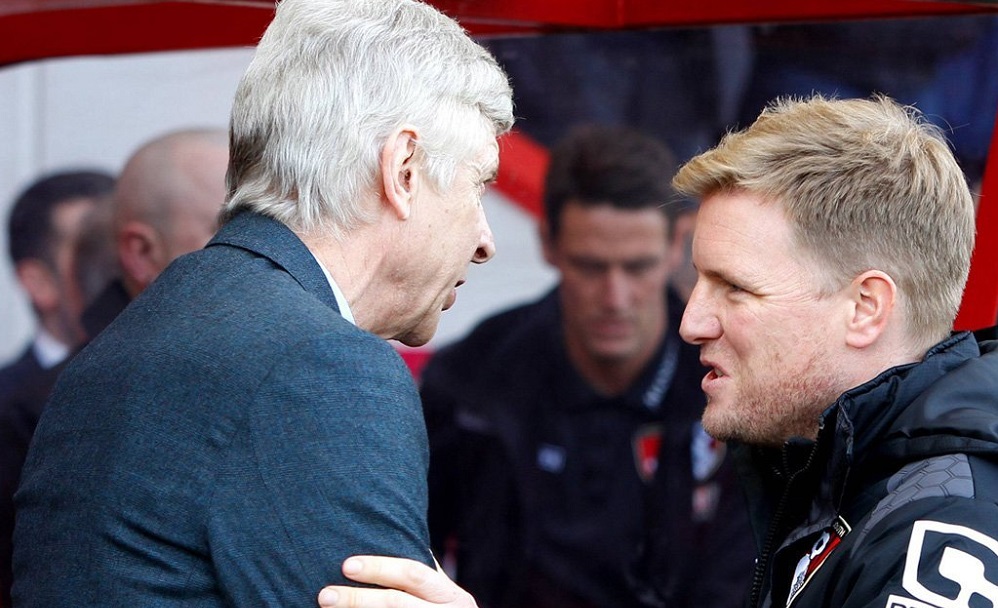 Need an excuse to tune in to tonight’s Premier League highlight between Eddie Howe’s south coast hopefuls and Arsene Wenger’s perennial title challengers? There’s no Jack Wilshere (boo!) – he’s ruled out by the league loan rules – but there are plenty of other reasons to get excited about the 7.45pm kick-off from Dean Court.

1 Olivier Giroud. The Frenchman might have his detractors – and is widely seen as a plan B option, rather than the main man in Arsenal’s strike force. But what Giroud lacks in consistency (he went 15 league games without scoring last season), he can make up for in talent – as he demonstrated in spectacular form against Crystal Palace on Sunday.

The striker produced his own version of that Henrikh Mkhitaryan ‘scorpion kick’ goal as the Gunners beat Sam Allardyce’s team 2-0 – except Giroud’s was arguably better. The 30-year-old set the free-flowing move into action in his own half, before racing down to the other end to unleash a back-heeled volley that manager Wenger says is in the ‘top five’ strikes of Wenger’s reign at the club. Whether that’s enough to give him significantly more game time is yet to be decided, though he’ll surely get a run-out here.

2 Bournemouth can win. Howe’s side don’t tend to do things by half, smashing four past Liverpool in the most jaw-dropping game of the season thus far, and turning over (admittedly, the less impressive) Swansea 3-0 at the Liberty Stadium last time out. The side are ninth in the Prem and the upset against Liverpool isn’t just a fluke – they held out for a goalless draw against Tottenham, and last season recorded wins against Chelsea and Man United.

3 …But Arsenal have a 100% record to protect. The Gunners won this fixture 2-0 last season, and have won all four of their games between these two sides – not a huge amount of encounters, admittedly. Still, the Gunners come here in a positive frame of mind, having won their last two without conceding a goal. Meanwhile since mid-December, the Cherries have been beaten 3-0 by Chelsea and 3-1 by south coast rivals Southampton.

4 Alexis Sanchez. Giroud might be the man of the moment, but Sanchez is likely to be the man of the season. With rumours that a Chinese club is putting together a deal that would see the diminutive but brilliant Chilean relocate to the far east, Sanchez’ days as a Gunner could be numbered.

But the former Barcelona man has been brilliant for Arsenal this season – with 12 goals in the Premier League. Remarkably, nine of those have come away from home, and it would be no shock to see Sanchez find the back of the net against this opposition tonight too.

You can bet on Bournemouth v Arsenal (and any of tonight’s other games) at 32Red Sport, where you’ll find a wide range of markets. If you’re looking for a different kind of flutter, be sure to check out 32Red Casino – there’s tons of top table games and slots to keep you entertained this winter!

Continue Reading
You may also like...
Related Topics:Arsene Wenger