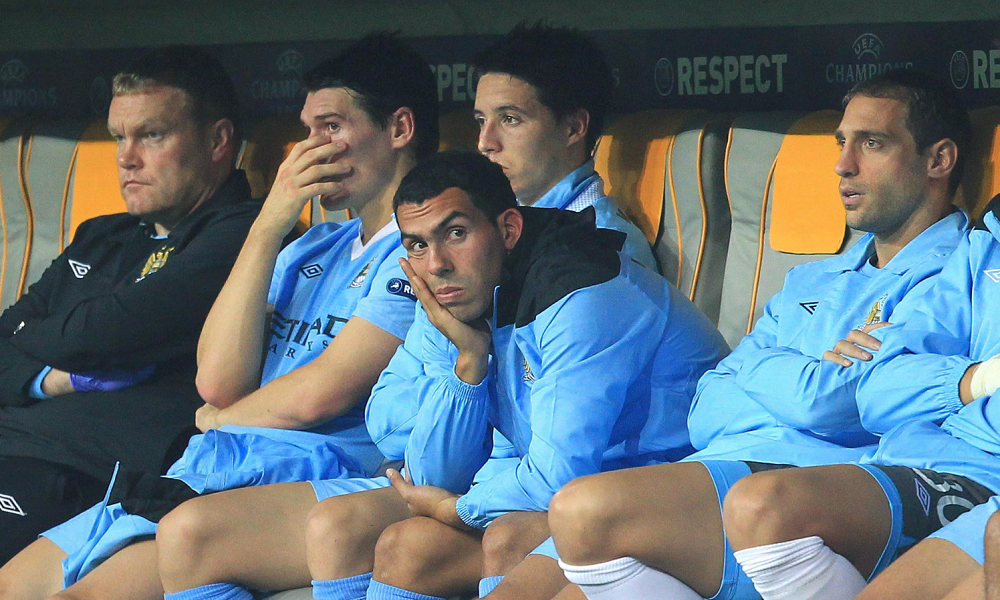 Kissing goodbye to the badge: Four clubs and players that fell out, big time

With Atletico Madrid opening disciplinary proceedings against Antoine Griezmann – who announced he was leaving the La Liga side to join Barcelona back in May – it looks like it’s about to get very ugly between player and club.

Of course, there’s nothing new about footballers falling out with the teams they play for in catastrophic fashion. Here’s a selection of some of the most painful partings of the ways…

This one still sticks in the craw. Tevez had already burned one bridge en route to City, having joined the blue half of Manchester after a two-year loan deal had seen him become a favourite at Man United.

United had wanted to sign the Argentine up with a new agreement to keep him at the club, but instead Tevez signed a five-year contract with City – where he proved such a hit that within a year of his arrival, manager Roberto Mancini even named the player club captain. Alas, that bromance would not last.

With the goals flowing, and less than 18 months into his contract with City, Tevez handed in a handwritten transfer request, complaining his relationship with executives at the club had broken down. But the issue quickly seemed to be resolved, with Tevez soon expressing his renewed commitment to the club.

Crisis over? Not quite. Months later, and benched for a Champions League game against Bayern Munich, with City 2-0 down Mancini attempted to bring Tevez on as a substitute – but the player apparently refused to take to the field (though Tevez later disputed this, claiming it was a misunderstanding).

With Mancini insisting that Tevez’s disrespectful behaviour meant he should never play for City again, there was general and widespread disapproval for the footballer’s conduct. But for all that, once the fuss died down Tevez would nevertheless return to play for the club again – and as he continued to impress on the pitch, the City crowd would greet him warmly.

Tevez later said that he had considered retiring from the game altogether during his problems with City, though he probably didn’t consider it very seriously. After all, he would eventually go on to play for Juventus, before returning to his old club Boca Juniors – and then becoming the highest paid player in the world during a stint at Chinese club Shanghai Shenhua, where he mustered just four goals in 20 appearances.

Roy Keane’s falling out with Man United featured a much less protracted outcome. Injured and unhappy, in November 2005 Keane slagged off his team-mates in fearlessly blunt fashion on United’s in-house TV channel, in a video that was deemed too damning for the club to release.

Here’s an excerpt: “There is a shortage of characters in this team. It seems to be in this club that you have to play badly to be rewarded. Maybe that is what I should do when I come back. Play badly. There is talk about putting this right in January and bringing new players in. We should be doing the opposite – we should be getting rid of people in January.”

Instead, Keane was the one who would be leaving, and he wouldn’t have to wait until January. The player had already upset United manager Sir Alex Ferguson, with the Irishman complaining about the underwhelming set up at a pre-season training camp, and then saying he would be willing to consider moving to another club during a fan phone-in.

A few weeks after the comments about his teammates, Fergie and Keane had a decisive bust-up, the manager telling Keane not to turn up for a reserve game, and taking the role of club captain away from the combative midfielder. Hours later, Keane would quit the club.

Not content with marrying a beautiful Swedish model and winning assorted domestic and European trophies with Barcelona, Portugal’s abundantly talented Luis Figo took it into his head that he also fancied playing for Barca’s bitterest of rivals, Real Madrid. It was quite a controversial move.

While several other players had moved from Barca to Real Madrid or vice versa, few have earned quite such enmity in doing so as Figo. Here’s former Barcelona president Joan Gaspart on the audacious transfer bid that lured away their star player: “I’ll not forget this. Whoever is responsible for this will pay for it. We’ll see how and when.”

Nonetheless, and threats of vengeance notwithstanding, Figo was allowed to leave Barca and join hated rivals Real for a world record transfer fee of €60 Million. He would go on to win La Liga as well as the Champions League with his new club – but even before those successes, betrayed Barcelona fans could barely contain their fury.

The rancorous hostility these fans harboured for their former favourite was memorably illustrated during a game at the Nou Camp, where a fan threw a severed pig’s head at the player as he was about to take a corner. And that contempt for their one-time hero still festers even today. In 2015, Barcelona themselves formally requested that UEFA remove the player from a combined Barca-Juventus legends game before that year’s Champions League final. The request was granted.

Sol Campbell spent the best part of a decade at Tottenham Hotspur, his outstanding defensive solidity eventually seeing him named captain of the North London side. Understandably a fan favourite, that goodwill was undone when he took the decision to take a short hop up the road to Highbury, signing with Arsenal and immediately cementing his status as one of British football’s best-known turncoats. Not that the Gunners fans were bothered.

The move to, at the time, a bigger club, was apparently made at least partly through the influence of Sven Goran Eriksson, who advised the player that he needed to be ambitious, though Campbell himself cited a desire to play in the Champions League.

When the move came, it was done via a free transfer, further angering Spurs and their fans, who had been seeking to negotiate a new deal with the England player. The choice of Arsenal had also come completely out of the blue; Campbell had been linked to other big clubs in the continent, and when the press conference announcing Sol’s arrival at Arsenal took place, the journalists present didn’t have a clue that Sol was saying sayonara to the Spurs.

Predicting what would come afterwards was less difficult. From that point onwards known as a Judas in certain quarters of North London, Campbell would be treated to a barrage of abuse whenever the two sides met over the next five years – even if he enjoyed plenty of success at his new club.

Four most remarkable pre-season club friendlies
Championship kick-off: Bets for the season ahead