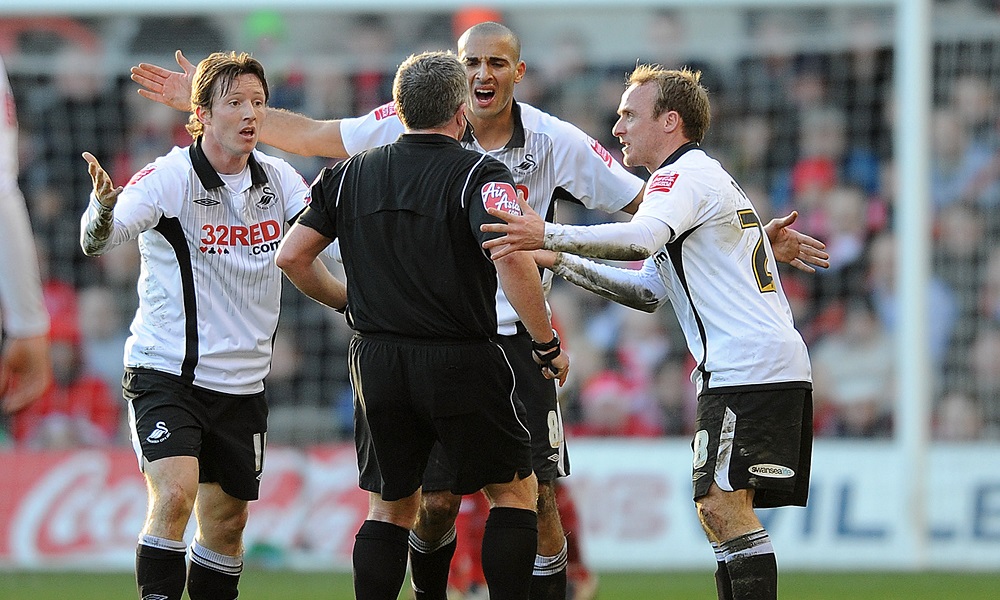 Earlier this week, Italian football referee Antonio Martiniello was banned from officiating for 12 months. His crime? Following an argument during a minor league match with goalkeeper Matteo Ciccioli, and having presumably exhausted every other avenue of discourse, the official decided to settle the matter by headbutting the keeper.

Not the kind of conduct that’s exactly in the spirit of the game – but it’s hardly the first time a referee has failed to meet the standards he’s expected to uphold. Here are five more outrageous examples of refs running wild.

Referee sends himself off, bemoans decision

Who’d have thought the Andover and District Sunday league would provide the scene for such white-hot footballing controversy? In 1998, Referee Melvin Sylvester was overseeing a match between the Southampton Arms and Hurstbourne Tarrant when tempers boiled over – specifically, Sylvester’s temper.

A school caretaker in his day job, when Sylvester was pushed by a player he responded more like an unruly pupil. Instead of booking Richard Curd, the official went off the reservation, punching Curd several times.

When Sylvester came to his senses he showed himself the red card, sloping off the pitch for an early bath. The raging ref was banned for six weeks and given a £20 fine for his behaviour – which scarcely improved his temper.

“I’m furious,” said Sylvester afterwards. “The disciplinary committee have got their priorities all wrong. They’ve convicted me of assault but the circumstances have not been shown. They’ve taken the side of the player.″ Suffering succotash…

Brazil is known for its beautiful football – but an amateur game in the city of Passos turned very ugly in 2017. Referee Camilo Eustaquio de Souza opted to solve an on-field dispute by pulling a gun on a player mid-match.

De Souza – a police officer in his day job – was apparently struck by one of the players. Instead of trying to de-escalate the situation, the ref ran over to the sideline and grabbed his officer’s handgun, along with a pair of handcuffs.

The official then took to the field to arrest the astonished player, who by this time had clocked what was going on – and had subsequently fled the scene of the crime.

De Souza would defend his behaviour, insisting “I was in charge of the game and to bring things under control I made the decision to act in my capacity as a police officer and arrest a citizen who assaulted me.” Hardly a fair cop, guv…

On me head, son

Not every referee is a touchy authority figure with a hair-trigger temper that can manifest itself in potentially horrifying ways, of course. Some of them are just frustrated strikers, it seems.

So it proved with Turkish referee Atan Hakem, whose actions will echo through eternity. In a game between Ankaragucu and Besiktas in 1986, the hapless official scored a goal against Besiktas after a stray pass ricocheted off his head.

An unfortunate occurrence – but it was surely compounded when the ref opted to rule the goal as legitimate. The referee’s header would prove decisive too, with Besiktas losing 1-0. And if that’s not upsetting enough for the losing team, how about this: Besiktas would also go on to lose the Turkish championship that season – by a single point. Referee!

Most of the names on this list seem to have been bungling officials caught in a moment of madness, rather than anything more calculated. That’s not the case with disgraced German referee Robert Hoyzer, however, who served two years for his part in a match-fixing scandal in the 2000s.

Hoyzer confessed to deliberately attempting to influence the outcome of various lower league matches and cup ties in Germany. In a bid to rig the result of various games, the referee awarded spurious penalties and even dismissed players.

Bar owner Ante Sapina, who masterminded the scam, is thought to have won hundreds of thousands of Euros betting on games where Hoyzer was officiating. After a court case where Sapina, Hoyzer, and a number of others were found guilty, the German referee was ordered to serve two years in prison – and subsequently banned for life from working in football in any capacity.

It seems likely that any referee who plies his trade at the highest level will endure his fair share of fiascos. But Clive Thomas seems to epitomise the endlessly self-confident official who refuses to allow anything – linesmen, common sense, sheer human decency – to cloud his judgement.

Thomas certainly didn’t win many Brazilian friends at the 1978 World Cup. The Welshman himself would later describe what transpired as “probably the most controversial decision that any referee has ever made, a decision which reverberated around the world”. He’s not wrong, but even in alluding to the event, Thomas was powerless to prevent himself doing so in blustering, egomaniacal fashion.

In a fateful match between Sweden and Brazil, the score was 1-1 with the end of normal time fast approaching. Brazil won yet another corner, Nelinho fired a hopeful ball into the box – and Zico leapt to connect with the ball, heading it into the back of the net and winning the match. Right?

Wrong. With just seconds of stoppage time played, Thomas had blown his whistle as soon as the corner had been taken – rendering Zico’s goal null and void. The outrage was palpable – but after the match, the ref hardly sought to make amends, instead digging deep to reach new reserves of pomposity.

“I saw the header, but I didn’t see the ball go into the net,” he insisted. “I had turned away. As far as I was concerned the game was over. The Brazilians have only themselves to blame. They should not have wasted so much time over taking the corner.”

The next day, Thomas was sent home, never to referee another World Cup match ever again. But years later, he would show no hint of remorse, or even recognition that he could have handled the incident more diplomatically; on rewatching footage of the match for a BBC feature, Thomas simply reiterated that he had made the correct decision, saying the footage showed “quite clearly how right I was.”