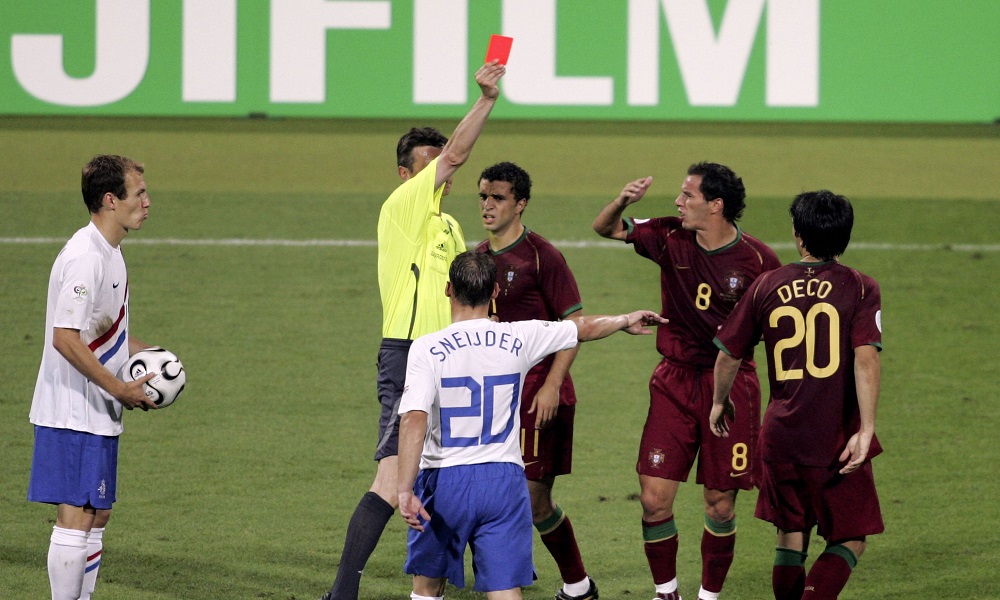 Red, no redemption: football matches with the most ever red cards, revealed

When Arsenal’s Eddie Nketiah was sent off against Leicester the other night, after having been subbed onto the pitch minutes earlier, it was fair to say Gunners fans were seeing red themselves.

Eddie’s unfortunate cameo in the match – being dismissed without so much as having touched the ball – was a hammer blow for North London’s finest. Yet in the grand scheme of things, turns out one piddling red card maybe isn’t such a big deal.

Take the lads over in Spain, for instance – they know a thing or two about early baths. Earlier this week, a La Liga match between Getafe and Villarreal saw FOUR players sent off in the 97th min.

Apparently, the Getafe players were rather narked after equalising in the 80th minute, only to see Villarreal win a penalty six minutes later – then score again in stoppage time. Football can be a cruel, cruel game.

Regardless, this veritable festival of sending-offs may have got you wondering – which matches have featured the most red cards in a single game? Wonder no longer…

Thirty-six red cards in a single game? It happened back in 2011, with a match between two teams in the fifth tier of Argentinian football clearly stretching this referee’s patience to breaking point.

Claypole and Victoriano Arenas were the teams in question, and the match had already had its share of incident in the first half, when a player from each side was sent off.

But those dismissals were mere amuse-bouches for what was to come, as a squad member from Victoriano invaded the pitch, threw a punch at one of the Claypole players and then legged it – sparking a mass brawl between both sets of players.

Though it was the police who had to be called upon to regain control over the anarchy unfolding on the pitch, after the match referee Damian Rubino filed a match report that served every player with a red card – together with the substitutes of each team and even a member of the coaching staff. In doing so, Rubino set the world record for red cards shown in a single game.

In March 2020, a bad-tempered encounter in the Copa Libertadores between Brazilian rivals Gremio and Internacional didn’t feature much in the way of goals – the game ended nil-nil. But viewers hoping for fireworks still got something to get their teeth into, with a total of eight red cards shown during this riotous carnival of indiscipline.

First, Gremio’s Luciano and Peppe were each dismissed in the 88th minute for setting off a mass rumble. But even after referee Fernando Rapallini took action, trouble flared again, with substitutes running from the bench to join in. Rapallini was eventually forced to send off another two Gremio players, along with four from Internacional.

With COVID-19 interrupting the competition, the second leg of the tie hasn’t been played yet. It’ll be interesting to see if the two sides can keep a modicum of dignity when they next meet; after three months and counting between matches, could be both sides are really wound up for the decider…

That little tussle between Gremio and Internacional might sound like a big deal – but the Copa Libertadores has seen worse.

Back in 1971, during a display of breathtaking disarray, an encounter between Peruvian side Sporting Cristal and Argentina’s Boca Juniors saw a stunning 19 dismissals.

In a South American rumpus of savage proportions, Boca captain Rube Sune went for rival player Gallardo, bloodying his rival with a corner flag; the Argentine was eventually subdued by the police.

When the carnage finally began to calm, referee Alejandro Otero showed red cards to every player on the pitch except the two goalkeepers (one of whom had actually been fully engaged in the fighting), and Boca defender Julio Melendez; the Peruvian had prudently chosen not to attack his own countrymen.

Three players were left with injuries bad enough to require a trip to the hospital; the others spent the night in the cells, remarkably. The event also caused genuine tragedy for one player, with the mother of Cristal midfielder Orlando de la Cruz suffering a fatal heart attack after witnessing the scenes on television. “It’s the saddest moment of my life,” de la Cruz would say later.

In contrast to the previous match, this encounter between Portugal and the Netherlands at the 2006 World Cup seems almost sedate by comparison – but nonetheless, with four dismissals it still features the most ever red cards shown in a World Cup match.

The so-called “Battle of Nuremburg” saw Russian referee Valentin Ivanov being a touch liberal with the cards, showing 16 yellows and four reds in a match that saw an injured Cristiano Ronaldo leaving the pitch in tears before half-time, having been on the wrong end of an ugly Khalid Boulahrouz reducer.

The Dutchman was booked, but remained on the pitch until the 63rd minute, when he picked up a second yellow for fouling Portugal captain Figo, who was happy to play up the impact of that foul. Prior to that, Portugal’s Costinha had been the first to be dismissed, picking up yellow cards for fouling Philip Cocu, then handling the ball.

Portuguese playmaker Deco would be given his marching orders in the 78th minute, earning a second yellow card for time-wasting; five minutes earlier he had received his first booking for fouling John Heitinga.

And finally, Dutchman Giovanni van Bronckhorst was shown a second yellow card in stoppage time, after fouling Tiago; the game finished with nine men on each side, with Portugal winning the match 1-0. As for Figo, he remained on the pitch despite (lightly) headbutting Mark Van Bommel. That’s how it’s done, Zizou…

In any case, the proliferation of cards in this match probably says more about the official than the players. Proving that old adage about even clocks being right twice a day, Sepp Blatter criticised Ivanov after the match, saying the referee should have shown himself a yellow card after that performance. In classic weaselly fashion, Blatter later apologised for his criticism of the ref.