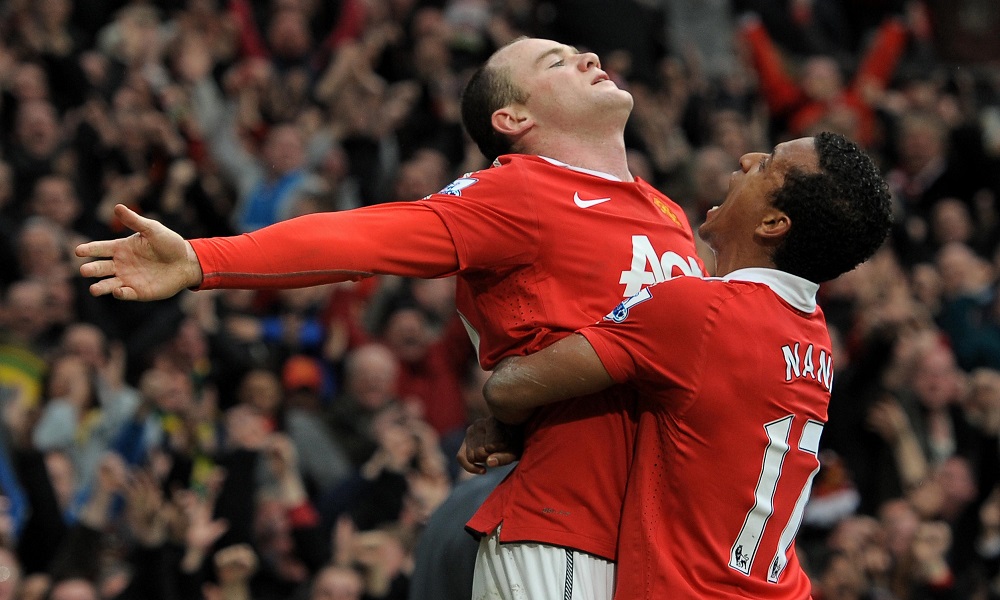 The rumours are true – Wayne Rooney is returning to English football. The brilliant former Everton and Man United player will be joining Derby (sponsored by 32Red) in January – and Rams fans are delighted!

As well they should be. Wayne is one of English football’s greatest ever players – so we’ve come up with six of our favourite Rooney moments. Here’s a small taste of what has made Wayne such a wonder over the years…

How about this for a way to announce yourself on the grand stage? Rooney’s first ever Premier League goal came in October 2002, when the youngster was still 16 years old (albeit with five days to go ‘til his 17th birthday).

Playing Arsenal at Highbury, in the final minute of the game Rooney beat David Seaman from outside the box to become the youngest ever scorer in the Premier League, winning the game for the Toffees in flamboyant fashion.

Hat-trick on his debut for Man United

Wazza doesn’t do underwhelming. At the age of 18, in his first ever appearance for United in September 2004, Wayne played in the Champions League against Fenerbahce – and scored a hat-trick in a 6-2 victory over the Turkish side. As well as scoring three goals of his own, Rooney also provided an assist – and confirmed the Old Trafford faithful had a fresh new hero to get excited about.

It’s Wayne’s favourite ever goal – and he’s not alone in rating it. Rooney’s spectacular overhead kick against Manchester City in February 2011 is so highly rated that a few years ago, the general public voted it the best goal scored in the first 20 years of the Premier League.

A dark day for Arsenal, but Wayne Rooney had a day to remember in August 2011, as an imperious United tore the Gunners apart. Rooney himself scored a hat-trick – the first of which was his 150th goal for United. A brutal, brilliant performance.

Yep, Wayne’s made a habit of scoring from way out. He first did it back at Upton Park back in March 2014 for Man United, scoring from just inside West Ham’s half with a beautifully placed lob en route to a 2-0 United win (Rooney scored the other goal, too).

When Rooney returned to Everton in 2017, West Ham were his whipping boys once again; on this occasion playing at Goodison Park, Rooney would score a hat-trick against the hapless Hammers, including one effort from inside his own half.

And Rooney scored another long-range thunderbolt for DC United back in June this year, the quick-thinking veteran hitting from his own half once again to beat Orlando City keeper Brian Rowe, who was left stranded way outside of his box.

With 120 caps – only Peter Shilton has more, with 125 – Rooney scored 53 goals for England to become the highest scorer in the Three Lions history, beating even the legendary Bobby Charlton, who racked up 49 goals across his career.