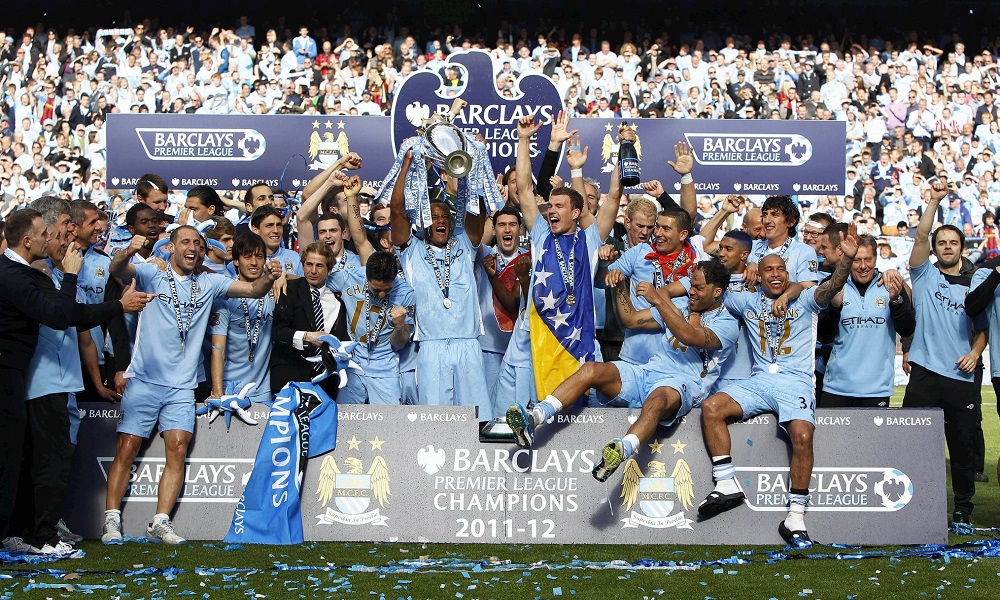 The last day of the season’s fixture list is looming – and in truth, there’s little left to be decided in this current Premier League campaign! Fortunately, final day drama hasn’t always been so lacking. Here are four of the most amazing season climaxes of all time. 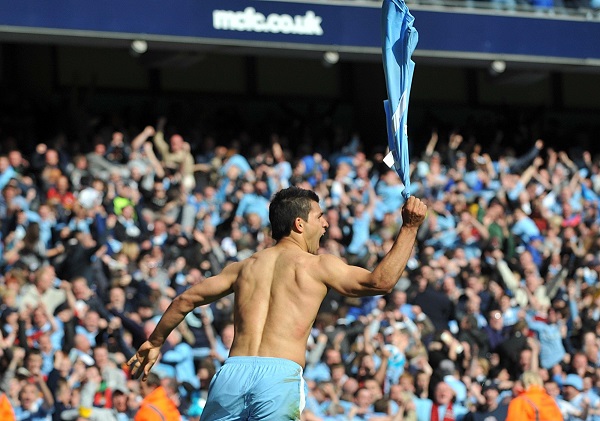 Roberto Mancini’s Man City went into the final day of the season level on points with their rivals Manchester United; City held an eight-goal advantage in goal difference. Few saw much potential for shocks, however. Playing their final game of the season at the Etihad, Man City were hosting Queen’s Park Rangers, who had lingered in the bottom reaches of the table for much of the season. A City league win seemed assured.

Yet as it turned out, what might have been a straightforward route to the title was instead a dizzying journey of lows and highs, even if the first half went largely according to expectations. Pablo Zabaleta scored in the 39th minute to – at least theoretically – settle the home side’s nerves.

But proceedings quickly went pear-shaped for City in the second half, Djibril Cisse scoring for the visitors three minutes in. Yet less than 10 minutes later, the bird-brained Joey Barton was shown a red card for sticking an elbow in on Carlos Tevez. QPR were down to 10 men, City needed to win to become champions – but unbelievably, it was the London side that found the net, Jamie Mackie putting the visitors a goal up. At the same time, Sir Alex Ferguson’s Man United were winning 1-0 against Sunderland, and poised to pull off a league victory that scarcely seemed feasible.

The eventual result went so thrillingly close to the wire that when the ref blew the whistle at the Man United game, there were jubilant celebrations amongst players and fans alike. Even though City were still playing, surely there was no way they could score two goals in the dying minutes of stoppage time?

Guess again. Substitute Edin Dzeko would equalise for City in the 92nd minute to give his side renewed hope – and just a minute later, Sergio Aguero would rattle home City’s third goal. From a position of power, City had seemingly thrown the championship away – then snatched it back from local rivals Man Utd in the dying seconds. This was the most absurd, astonishing ending to a league campaign in the history of the Premier League. 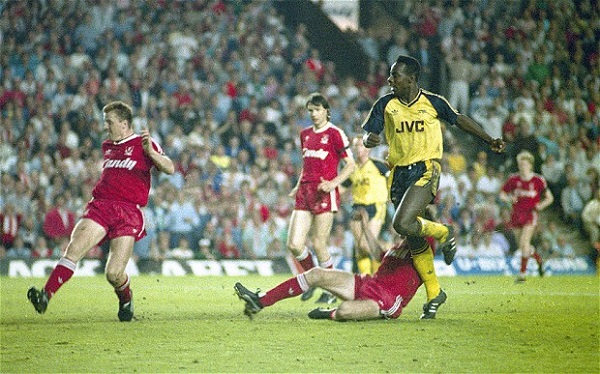 Arsenal’s last game of the 1989 season was away to a Liverpool side who had dominated English football in the preceding decade, winning the league title on six occasions. The Gunners could win the league only if they won this match by a clear two goal margin – yet the North London club hadn’t won a single game at Anfield in the previous 15 years.

Arsenal came into this game having failed to win either of their previous two league games (both at Highbury), and few gave George Graham’s team much of a hope in hell. Liverpool themselves were recovering from the aftermath of the Hillsborough disaster, which had taken place only a month earlier. But even in the shadow of that awful event, the Merseyside team were widely expected to take victory here.

Instead, Arsenal soaked up pressure in the first half to maintain a 0-0 score line at half-time. Then in the second half the Gunners started creating opportunities of their own, with Alan Smith heading home to crank up the tension for both sides as he gave Arsenal the lead.

Yet while Liverpool couldn’t find an equaliser, nor could Arsenal build upon that lead – until the dwindling moments of stoppage time, when midfielder Michael Thomas rifled home a shot to break Liverpool’s hearts, and guarantee Arsenal their first league championship in 18 years. 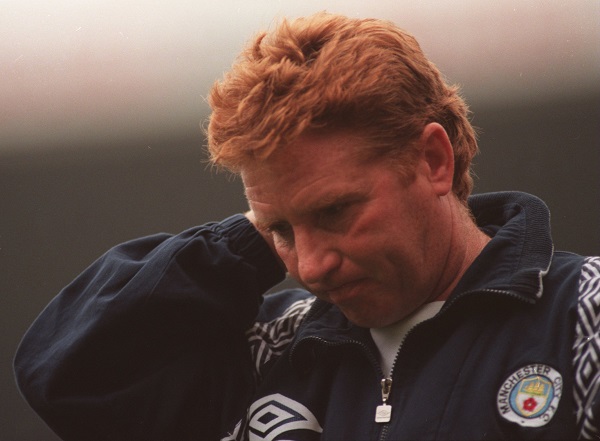 Manchester City stand imperiously atop the Premier League table now, and can claim a 100 points total for the first time in the history of the Prem if they beat Southampton on the final day of the 2017/18 season. But it wasn’t always like this for City.

Back in the mid-nineties, City went into the last game of the season hosting Liverpool, knowing only a victory at Maine Road would guarantee their league status. Yet depending on results elsewhere, a draw could be enough to avoid relegation.

Steve Lomas had scored an own goal to give Liverpool the lead, before Ian Rush found the net shortly before half-time to make it 2-0 to the visitors. Yet City mounted a stirring comeback, Uwe Rosler scoring a penalty in the 71st minute before Kit Symons levelled the score seven minutes later.

With the score 2-2, the news apparently filtered down to City manager Alan Ball that fellow relegation candidates Coventry were losing, meaning a draw would be enough to keep City in the top flight. City duly attempted to protect the score line by running down the clock, Lomas keeping the ball in the corner.

Unfortunately, Ball had been misinformed – City required a win after all. City forward Niall Quinn realised this, even if no-one else did – having been subbed off, he ran back towards the players to tell them only three points would do, but alas, it was too late; City had time-wasted their way into the Championship. 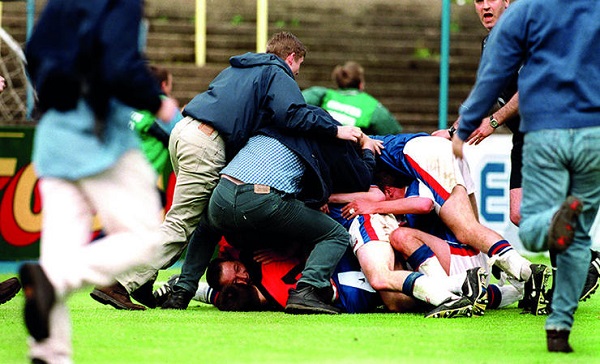 High drama doesn’t just take place in the top flight, of course. In 1999, on the final day of the season Carlisle United needed to beat Plymouth Argyle, or they would lose their spot in the football league. With the score 1-1, and five minutes into stoppage time, it was now or never time for the Cumbrian side – but who would provide the heroics?

Step forward unlikely saviour Jimmy Glass, a hitherto obscure goalkeeper, on loan from Swindon. With less than a minute left to be played, Glass ran the length of the pitch as his side took a corner – and responded quickly enough to the keeper’s parry to find the back of the net. Delirious supporters immediately ran onto the pitch to embrace their new messiah; Glass had preserved Carlisle’s 70+ year history in the league, his status as a club legend immediately assured.

This was just the third match Glass had played for Carlisle – and he would never play for them again, moving on in the summer and playing for a number of sides, before deciding to retire at the age of just 27. Glass currently works as a taxi driver – but even if the man himself has moved on, his glorious moment in the spotlight will be remembered decades from now.

Champions League: The underdogs who went all the way
5 of the strangest transfer sagas of all time