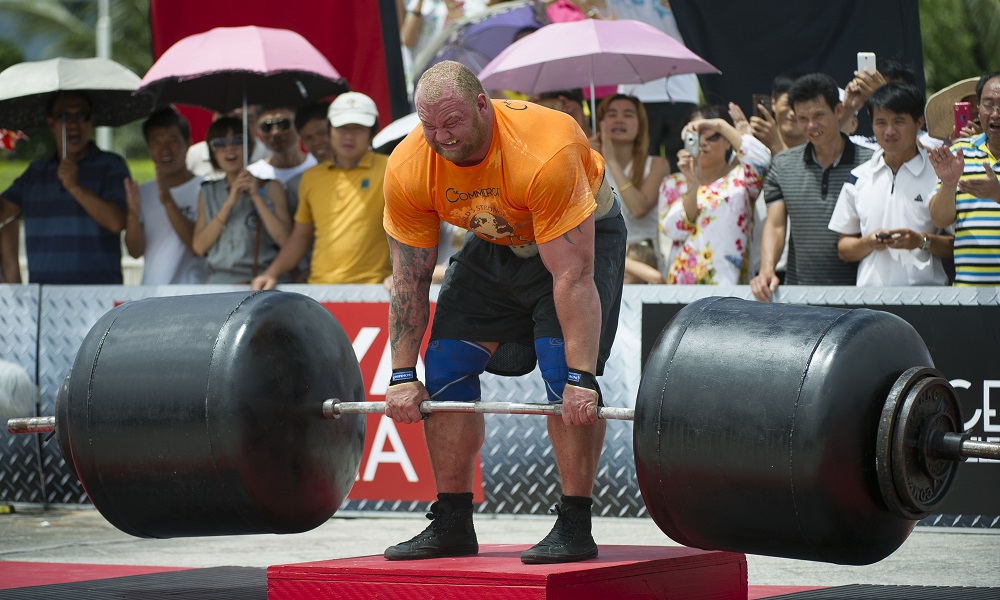 With the news that Hafthor Bjornsson set a world record for a deadlift at the weekend, now Bjornsson and bitter rival Eddie Hall look set to face one another in the boxing ring.

Best known for a menacing turn in Game of Thrones where he played “The Mountain”, Bjornsson made history at Thor’s Power Gym in Iceland on Saturday, lifting a bicep-straining 1,104 lb (501 kg) to put his name in the record books.

In doing so, Bjornsson went one better than Hall, who had been the first man to lift 500 kg back in 2016. And in an encounter of potentially earth-shaking dimensions, the two are apparently set to go toe-to-toe in a sanctioned boxing match at some point in the future.

Promising a grudge match akin to the time Bobby Bacala brawled with Tony Soprano, there is serious bad blood between Bjornsson and Hall, with Bjornsson calling out his British rival thus: “Eddie, I just knocked out your record. And now I’m ready to knock you out in the ring.”

And Hall responded immediately, telling Bjornsson via a public video message: “1,000 per cent I’m going to sign those papers [to agree to the fight]. You called me a cheat at World’s Strongest Man 2017.

“I can’t put that to bed, I can’t forget it. People may forget it, but you’ve never apologised.”

Sounds like this one could be spicy. Regardless of what happens with that slugfest though, Bjornsson’s record-breaking feat of strength persuaded us to look back at some more memorable strong men.

Arguably the most famous strong man on the planet, Arnold’s combination of preposterous muscles, affable persona and an accent that gave strange life to even the most banal dialogue made him one of the biggest box office stars on the planet in the 80s.

Before that, Schwarzenegger had moved from his native Austria to spend time in the UK, living in Stratford, east London for a spell in the seventies before heading out to California to pursue his dreams of muscle-based stardom.

A former Mr Universe, one of Arnie’s first brushes with fame came when he appeared in the documentary Pumping Iron – you can find the whole thing on YouTube, but there’s a taster below.

In some alternate dimension, it’s Geoff who is playing a cyborg sent from the future to track down John Connor, Geoff’s soft Lincolnshire accent that becomes synonymous with hulking, musclebound action heroes getting their asses to Mars.

For now, we’ll have to make do with video footage of Geoff throwing a kettle bell over a pole vaulting bar.

Freakout! When sports coaches lose the plot
Taking the Michael: All about “Air” Jordan, NBA legend