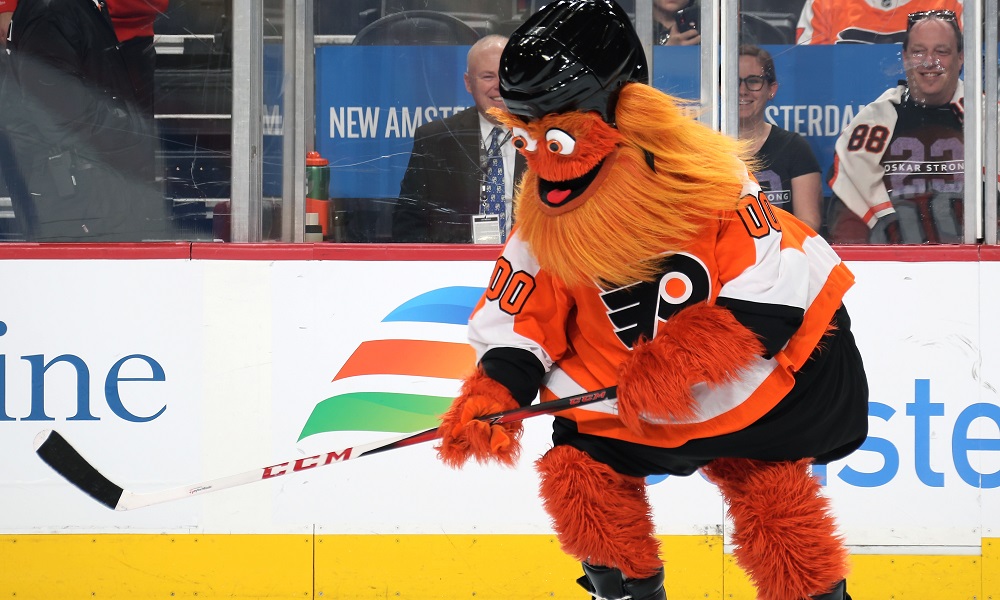 Out of control – four times that mascots went wild

In a further sign of society’s accelerating decline, it seems that Gritty, the much-loved official mascot of NHL team the Philadelphia Fliers, is under investigation for allegedly thumping a child.

With his orange fur and googly eyes, Gritty may look like a close cousin of eighties cereal mainstay Honey Monster – but who knows what lies beneath that ever-smiling exterior. With that in mind, it’s time for an unflinching look at the dark side of these capering, costumed cut-ups.

Tasked with delivering comic pratfalls in between the sporting action, the mascot is supposed to be a symbol of innocent frivolity. But what happens when the good times give way to something more sinister? Join us now as we investigate the seedy underbelly of mascottery.

The Phillie Phanatic vs Tommy Lasorda

Lasorda was a successful coach with the Los Angeles Dodgers. The Phanatic was a famously mischievous mascot for the Philadelphia Phillies. When dey got togeddah, it was moider – or close, anyway.

Lasorda was a combustible type, while the Phanatic was an oversized furry green creature that looked not unlike a Doctor Seuss character brought to life. And at a televised game between the Dodgers and the Phillies in 1988, as the Phanatic walked around in satirical fashion imitating Lasorda’s unique gait, having already stomped on a crude effigy of the Dodgers manager, Lasorda’s temper boiled over.

The coach strode up to the mascot, catching hold of the unfortunate green fellow – before doling out a heartfelt thrashing. It might have looked hilarious, but the man playing the Phanatic later admitted that Tommy had “beaten the piss” out of him.

Cyril the Swan vs Zampa the Lion

There have been barneys between mascots before, but seldom has a set-to between two men decked out in animal costumes seemed so filled with genuine hostility. With a bit of previous that had seen Swansea’s Cyril the Swan kick a ball at a Millwall player’s head in an earlier game, the teams met again in February 2001, Cyril geeing up the home fans – and annoying the visitors.

Cue Millwall’s own mascot Zamba the Lion confronting the nine-foot tall Cy at half-time – an encounter that would quickly erupt into mascot-on-mascot violence. Cyril would punch Zampa hard enough to take his head clean off – then, for good measure, he booted the lion’s head into the crowd, to the roaring approval of the fans. Oh the humanity. 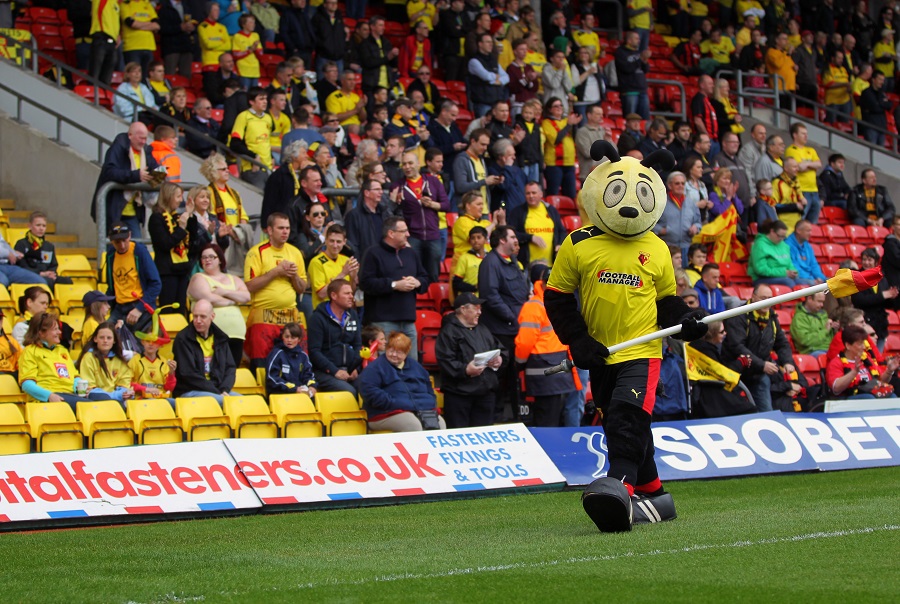 Watford mascot Harry the Hornet is a fairly innocuous looking fellow in the pantheon of madcap mascots, a cheerful, oversize wasp who rarely courted controversy – til his fateful meeting with Wilf Zaha in 2016.

With the Crystal Palace player booked for simulating a dive – not his first time at that particular rodeo – Harry decided to play to the gallery by taking a dive of his own in front of Zaha.

The crowd ate it up, but then Palace boss Sam Allardyce blasted Harry, claiming the mascot was “out of order”, while Zaha himself didn’t immediately seem to see the funny side, even if he tried to put on a brave face on Twitter a little later.

Ahead of a meeting between Palace and Watford in 2018, current Palace manager Roy Hodgson reopened old wounds with a blast aimed at the man in the wasp suit. “If you’re asking me whether Harry the Hornet, who I presume is the mascot, should dive in that way, I think it’s disgraceful,” claimed Hodgson, which, you have to say, is a stunningly humour-free take on a pretty silly situation.

In any case, soon after being singled out by Hodgson, the man behind the mask – a fellow called Gareth Evans – opted to leave his position as the waspish mascot.

Announcing his departure on Twitter, Gareth said “I have officially stepped away from being the match day mascot at #watfordfc my decision, proud of what I have achieved, the memories made and the experiences I’ve had – I was privileged and now heavy hearted also.” Death (of a glorious mascot career), where is thy sting?

How I Met your Mother 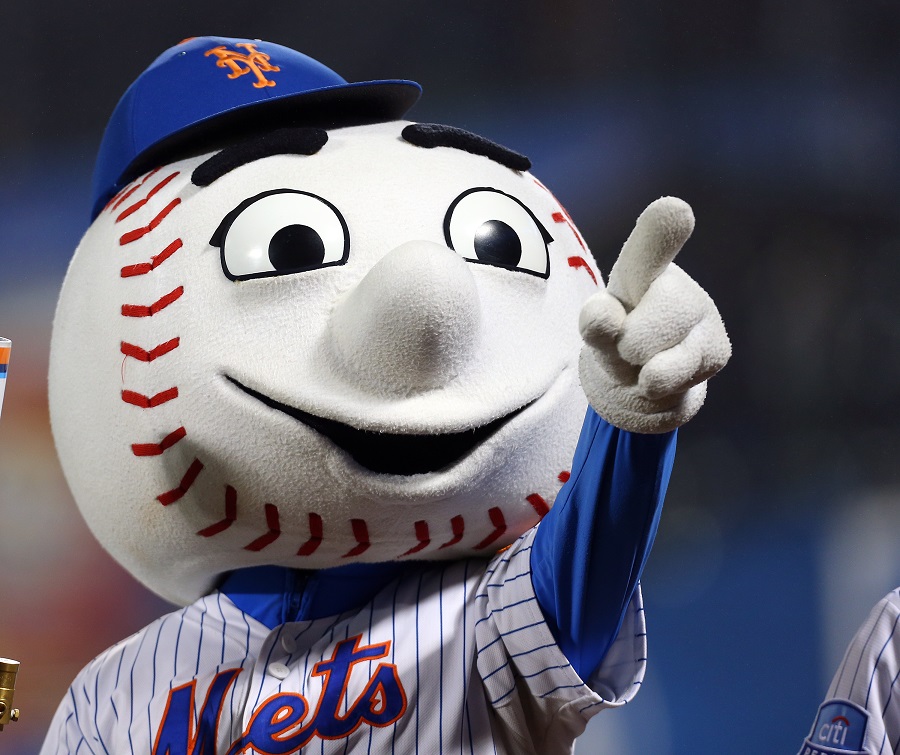 A straightforward case of mascots acting in decidedly un-mascot-like fashion, this story concerns New York Mets mascot Mr. Met, a friendly, goofball looking kind of fellow with a large baseball for a head. Alas, during a game against the Milwaukee Brewers in 2017 Mr. Met took time out from his more traditional mascot duties to raise his middle finger to the fans.

In defence of Mr. Met, fans of the Mets claimed the mascot was merely defending his honour, following allegations that Brewers supporters had been shouting hurtful remarks about the Mascot’s mother.

It remains tantalisingly unclear if the insults were aimed at the mother of the man wearing the costume, or this was a more abstract taunt aimed at the actual “mother” of Mr Met – something along the lines of “your ma was an ice hockey puck,” maybe. Whatever, Mr Met’s raised digit was deemed an unforgivable overreaction, with the man in the costume told he would never mascot again.